Pork and Chive Dumplings (or Jiao Zi) are a CLASSIC. These juicy parcels of love are made with a delicious meat-filling that is encased in a super simple dumpling dough. Pork and chives is the traditional option but by all means, jazz it up as much as you want. Pan-fried or boiled, these dumplings taste amazing and well worth every bit of effort.

Dumplings will always hold a special place in my heart, especially these pork and chive ones. My grandmother used to make these all the time, both pan-friend and boiled ones. As she got older, we had it less and less often so each time she made them, it was a really special treat. She’ll still make them for me when I’m back (and if I ask really nicely) but now then I’ve moved halfway across the world, I’ve had to learn to make my own. I don’t think they’ll ever compare to hers but these are still pretty darn good.

P.s. I’ve sent her pictures of these dumplings and she’s very pleased with how my dumpling making skills have turned out.

The first time you make dumplings at home, it can seem like a little iffy but PRESS ON! Homemade dumplings taste miles better (and cheaper) than the frozen ones from supermarkets and the more you make them, the better they’ll be and the faster you’ll be able to make them! Once you get into the zone, it’ll feel like a breeze.

You can most certainly buy ready-made dumpling dough from your local Asian supermarket (I’ve used it in this Pork and Cabbage Dumpling recipe) but if I have the time, I much prefer the chewiness of homemade dumpling dough. Homemade dough is also waaaay easier to pleat i.e. better at hiding any mistakes! It’s also super easy to make and uses only 2 ingredients – plain flour and hot water.

I wouldn’t worry too much about the actual folding of a dumpling. All you need to ensure is that the dumpling dough stays shut during cooking. You can simply fold over the dough into a half-moon shape (like a taco), seal the ends shut ,and that will be perfectly fine. If you prefer to make it fancy and add in a couple of pleats, you can definitely do that as well. Below is a video of how I folded my dumplings, but there’s also loads (and I mean loads) of tutorials available on Youtube.

Now let’s talk filling – this recipe is for a simple mix of minced pork and garlic chives (aka Chinese chives or Chinese leek leaves). Garlic chives can be readily found in the fresh foods section of your Asian supermarket but if you can’t find it, you can use spring onions instead. That said, you can honestly put whatever you like inside of a dumpling wrapper. Kimchi and pork would be really nice, mushrooms and tofu would work too. I’ve actually seen someone use beef ragu inside of a dumpling so… get creative! 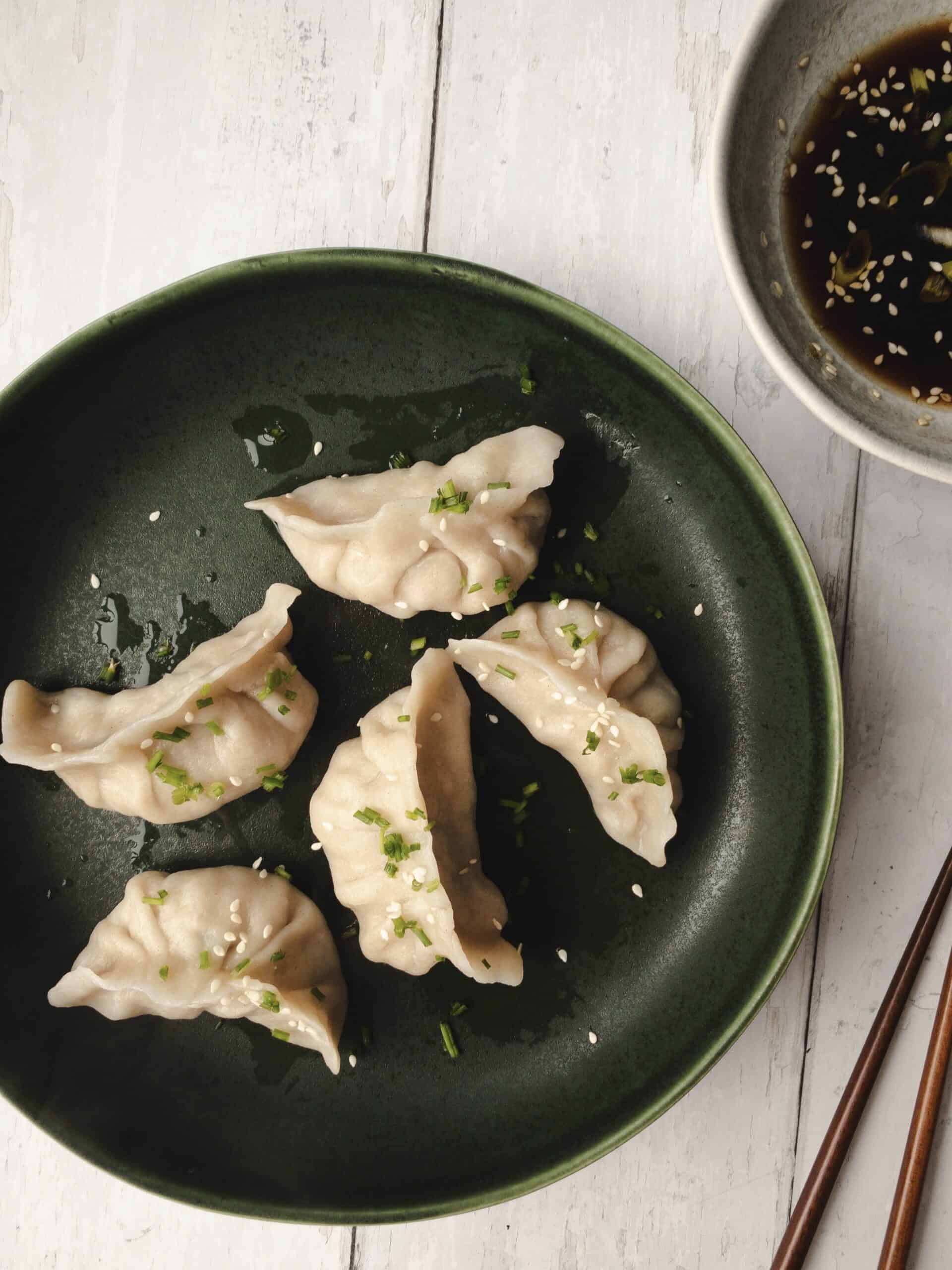 These juicy parcels of love are made with a delicious meat-filling that is encased in a super simple dumpling dough. Pork and chives is the traditional option but by all means, jazz it up as much as you want. Pan-fried or boiled, these dumplings taste amazing and well worth every bit of effort.

For the dumpling skins, add the flour into a bowl of a stand mixer with the dough hook attached. Gradually pour in the hot water and knead on low speed for about 10 minutes, until the dough is smooth (Note 1). Cover the bowl with cling film or a damp cloth and let the dough rest for at least 30 minutes.

In another bowl, mix the minced pork, garlic chives, soy sauce, egg, salt and sugar until well combined. Refrigerate the filling for at least 30 minutes to overnight.

Roll each piece of dough into a ball shape. Leave a third of your portioned dough on your countertop and cover the rest of them with cling film or a damp cloth so that they don’t dry out too much.

Take one of the small dough balls and flatten it with the palm of your hand. Using a rolling pin, roll out the the top most edge of the disc. Rotate the dough 30° and again, roll out the top most edge. Continue to do this, rotating and rolling, until you have what looks like a little fried egg - the dough should be flat around the outer edges (about 1mm) and the centre is thicker and slightly raised.

Add 2 teaspoons (adjust accordingly) of filling to the centre of the skin, then fold the dumpling skin over (like a taco) and gently press the dough to seal the dumpling. You can add some pleats if you want to (Note 2) but this isn’t necessary, the dumpling would still be delicious! Place the dumplings on a parchment paper, at least 1cm away from each other. Repeat until you finish the dough or filling.

If you are freezing the dumplings, place them into a freezer on something flat that’s been lined with parchment paper. Once the dumplings are frozen, you can transfer them into a ziplock bag (Note 3). Otherwise, you can cook them by boiling or pan-frying them.

For boiled dumplings: Bring a pot of water to a rolling boil and add the dumplings in. Once the dumplings float to the surface, cook for another minute and then remove.

For pan-fried dumplings: Heat some oil in a pan over medium heat. Add the dumplings into the pan, ensuring space between each dumpling, and cook for 3-4 minutes until the bottoms become brown and crisp. Add boiling water until it fills the pan to about 1cm, then cover the pan and let the dumplings steam until all the water has evaporated. Remove the pan from heat and let the dumplings cook for 1-2 minutes before scooping out.

2. Fold the dumpling skin over and press the middle top of the dough (the top of the half-moon) together. Pull the front edge forward and pinch to crease. Continue pleating on the side you started until you reach the edge (should only be 1 or 2 more pleats and at the edge of the dumpling, there will be a small air pocket. Poke that in with your thumb and press together. See video above for a clearer example.

3. When ready to cook, just add the frozen dumplings into a pot of boiling water or onto a pre-heated pan and cook as per instructions for boiled or pan-fried dumplings. They will take a little longer to cook but you do not need to defrost the dumplings beforehand. 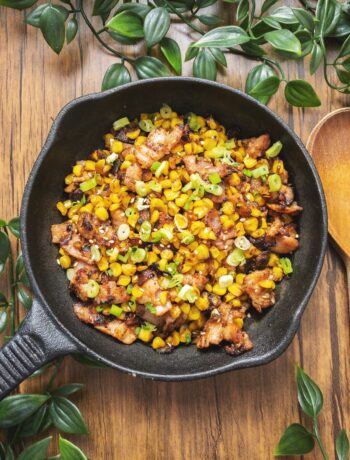 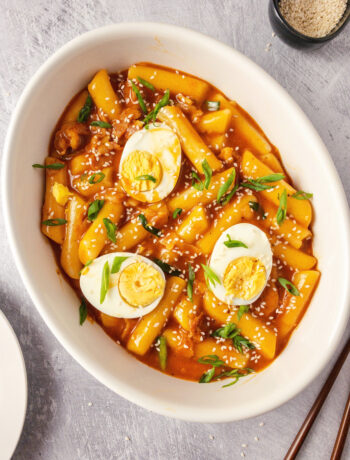 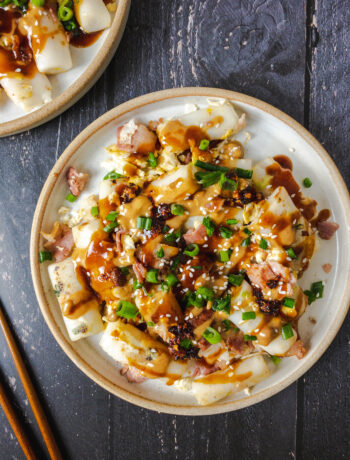 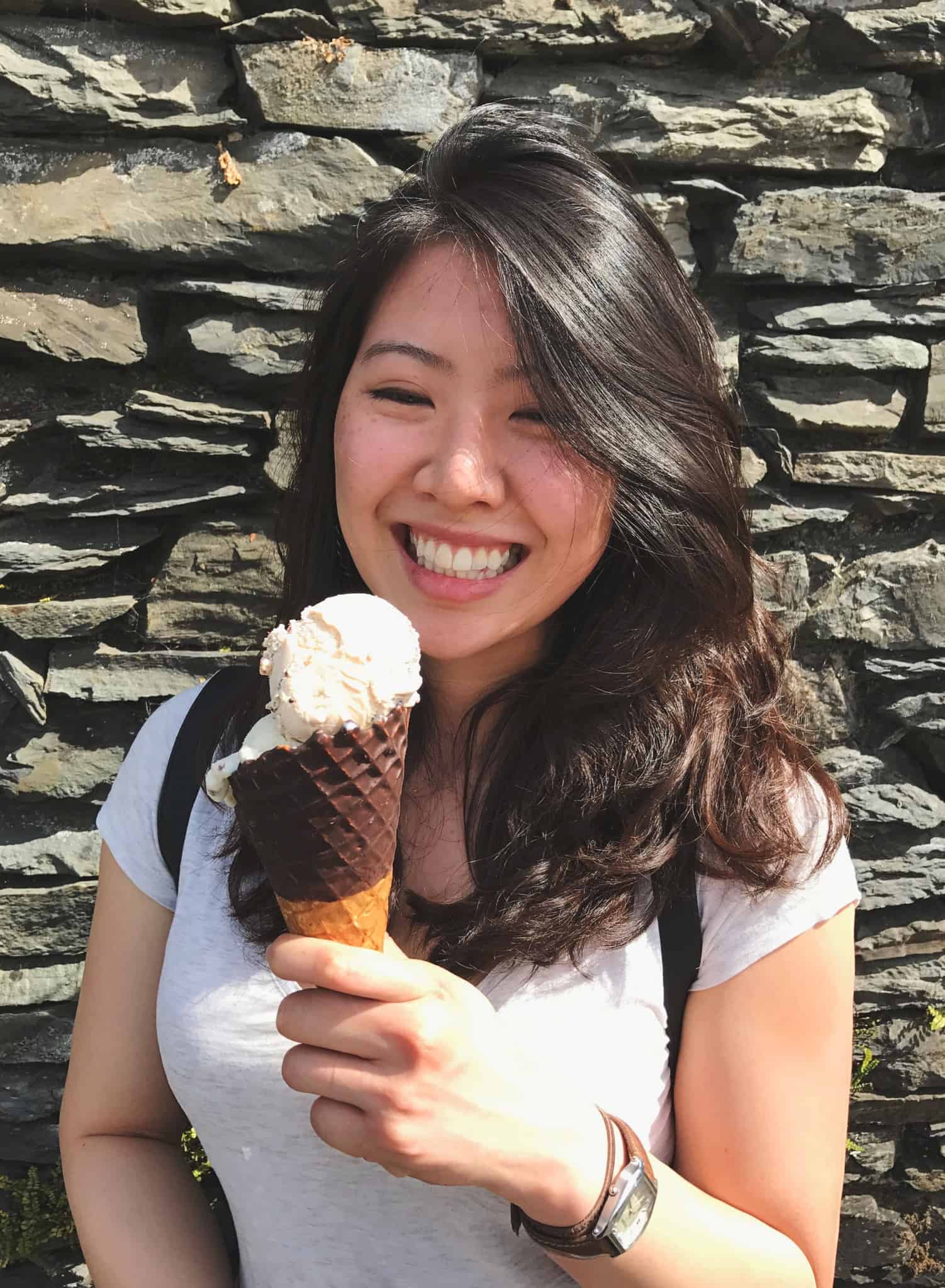 Here, you’ll find delicious recipes inspired by my Asian heritage, travels and endless cravings. I love food, (be it cooking or eating it) and through this blog, I hope to spread the joy that food brings, from my tiny kitchen to yours. Read more » 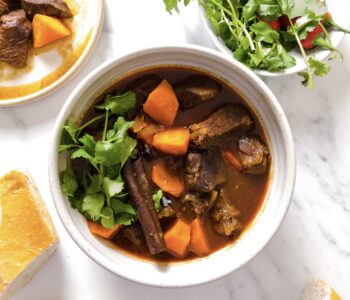 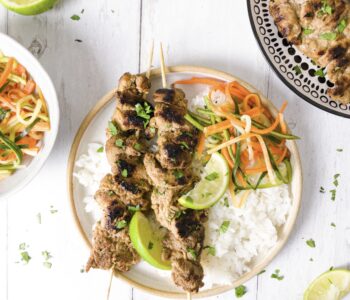 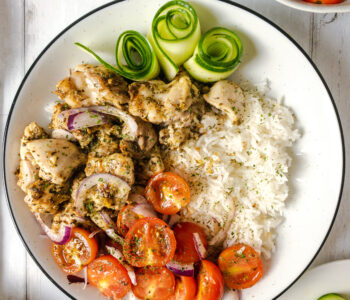